As I was listening to Apple's WWDC conference today, what ran through my mind the most is if there were ever a time to switch to the world of Apple computing now is it. Today's WWDC keynote presentation was chock-full of new and updated iOS mobile software—too much to cover in this one article. But the most "new thing" coming from Apple this Fall is iCloud, a file sharing and streaming service that requires no wired connections. 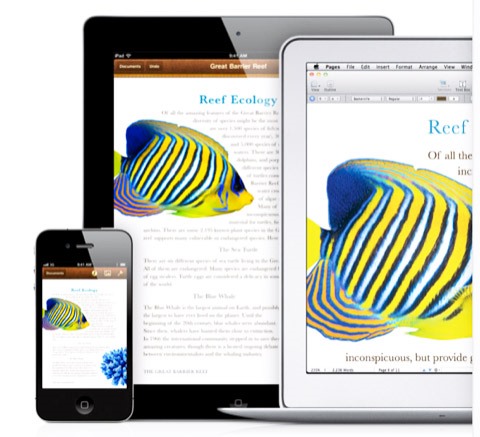 With iCloud and wireless computing, you can use iOS devices—the iPhone, iPad, and iPod touch—without having to depend upon a personal computer. In other words, you will be able to download apps, songs, documents and other media, and sync your media between these devices without the use of a single USB cord.

The free iCloud will take the place of Apple's long-time cloud storage service, MobileMe, which cost $99 per year (current MobileMe users will have their account automatically renewed until June of 2012, so it's now free for you.) If you're not familiar with MobileMe, then think of iCloud as your new and improved Dropbox account. With iCloud, all your purchased apps, music, camera photos will be backed up on a hourly basis, which means you don't have to worry about backing up the that data yourself. When you download an app from say the App Store onto an iOS device, it will always be on Apple's server for you to download again, even if you lose or damage your iOS device or Mac. If say the internal hard drive of your Mac permantely crashes, you can re-download to your devices all the apps you purchased in the store with only one single license—your Apple ID. iCloud registrants will also get a free Mail, Address, and Calendar account—all three of which can be synced between devices. I have been using MobileMe for several years now, and believe me, it has made syncing my email, contacts, and appointments very easy.

When iClouds and the new iOS 5 apps are released, four new apps and services will make your media management a lot easier. These apps include:

Documents in the Cloud

What's not clear about Documents in the Cloud is will you be able to upload ANY document on your device (PDFS, Word documents, etc) to the cloud, or will it be limited to iWork documents?

There are several great apps for getting the photos you take with the camera on iOS device, but with iCloud, Apple's Photo Stream app will automatically upload your photos to the cloud and sync them back down to your other devices. So take a photo with your iPhone and it will automatically show up on your iPad. There will be a 1000-photo limit to your free photo stream account, but I wager that Apple will eventually sell additional storage space to photo hobbyists and professionals who need it. The photos you upload will remain in your cloud account for 30 days, giving you ample time to download them to your computer, e.g. iPhoto library. The Photo Stream means that you will not need to open another application to start the upload process.

In addition, if you have an Apple TV device, your recent photos will also be downloaded to the device, and thus to your HDTV. So if you're for example hold a party and take photos with you iPhone, they instantly show up on your Apple TV for everyone else to see.

And finally iTunes Match. This is the app and syncing process that iOS mobile users have been waiting for. It will enable you to sync all your iTunes music purchases between your devices. Again, you don't have to make a USB wired connection to download your iTunes songs. 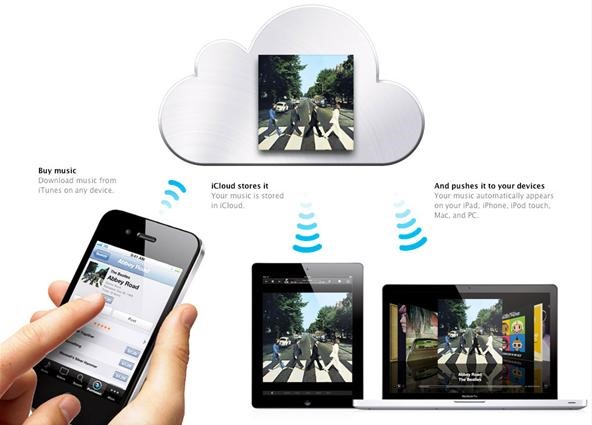 In addition, the match part of iTunes Match means that Apple's cloud server will enable you to listen all your non-purchased iTunes songs as well. You will not have to upload all of your say ripped or other songs purchased from other music sites. Apple will simply match what you have in your iTunes library with their huge 18 million song catalog. So everyone who has owned a copy of a Lady Gaga album will have access to that album from Apple's music server, whether they purchased it from iTunes or not.

However, though Apple will stream your music to you over the cloud, it will only be music that you own. That means you still have to purchase and/or rip files of music. Access a catalog of streaming music already on a server, like Rdio.com or Pandora, is still a cheaper way to go, and it means you don't have to download or create more and more files of music.

Also note that of the three iCloud app services, iTunes Match comes at a price. It will cost you $24.99 to 20,000 songs. While these subscription fees are cheaper than the cloud music services of Amazon and Google, I would still rather pay $60 a year to Rdio.com and get unlimited access to the site's music catalog, saving tons of money in music purchases, with no file downloads involved. See my article, Why Rdio.com Is Better Than the iTunes Music Store for more about this.

All in all, the upgrades and new services coming to Apple's operating systems are pretty outstanding. Apple is definitely taking its customer base into a wireless future.

One mistake - the iTunes iCloud service is $25 total per year, no matter how many songs you have.

Hmm, okay, I think I read the prices incorrectly (http://www.apple.com/icloud/features/) in that Apple is showing how their prices compare with Amazon. Their service is $25 for up to 20,000 songs. The chart though is a little misleading. Thanks for that correction.

I really like the idea of iCloud, but there's a few things I'm not sure about. I don't believe any content will be streamed to devices, only available for download to devices (at least that's what I got from the keynote). So, it seems there is no streaming at all, or am I wrong?

Also, I love the idea of iMatch, but I'm not sure my OCD-mind would like it. The most enjoyment I get from my music collection is browsing it and fixing all of the finer details myself. It A.) helps stave off my organization-craving and B.) gives me a chance to dig deeper into my files, finding things I didn't even know I had. iMatch would take the fun out for me, plus what information would Apple use for song files, theirs or what I want? I have a system that I don't want compromised, so I'm not sure I would chance it. And how accurate would iMatch be? Would it replace my song with the iTunes version completely, because if it did, what if it wasn't the exact same song?

I think I'll wait for others to use it and see what happens.

Justin, I might do a follow-up article on this subject. What Apple has released so far with iMatch shows that it's not really a music streaming service. It's basically a locker service for your owned music.The questions you are very important ones.

Great. I'll be checking that out!

EasyCloud for OS X, their Utility app that allows Mac users to simply drag and drop data files into the EasyCloud Drop Window to have those files immediately available on all their Macs and iDevices. The app's two functions, Drop and Mac to Mac, support the following file types via iCloud: .pages (iWork), .numbers (iWork), .keynote (iWork), .doc (Microsoft Word), .excel (Microsoft Excel), .ppt (Microsoft Power Point), .txt (TextEdit Application), etc. The Drop function sends files directly to all the user's iDevices containing the matching app and via a common iCloud account. The Mac to Mac function enables both syncing and file sharing between Macs sharing the same iCloud account. A browser window displays all files available for sharing between Macs, files can be opened or deleted, and the list refreshed.
http://www.kandalu.net/products/easycloud