This Guy Has My MacBook is a gripping tale for iOS nerds far and wide, documented via interaction designer Joshua Kaufman's tumblr. When Kaufman's MacBook was stolen from his apartment in Oakland, CA, on March 21, 2011, he quickly activated Hidden, a previously installed app that enabled Kaufman to collect photos of the thief, as well as screen shots of the computer in use.

Over a month later, Kaufman's persistent efforts finally came through, when the police arrested the perpetrator:

"(May 31, 8:37 PM PST) ARRESTED! An Oakland police officer just called me to let me know that they arrested the guy in my photos! BOOYA! The police used my evidence (email which pointed to a cab service) that he was a driver and tricked him into picking them up. Nice work OPD!"

According to Kaufman's Twitter, he picked up the recovered laptop around an hour ago. The captured pics are hilariously creepy—not to mention great advertising for Hidden. 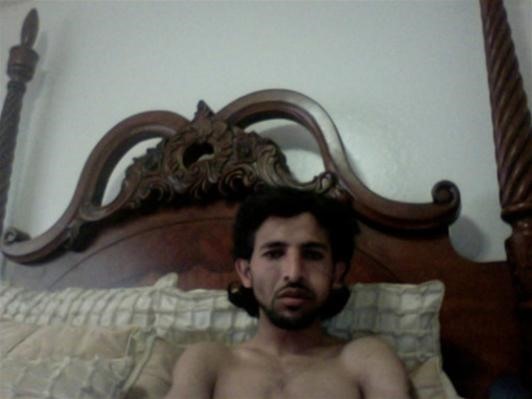 If you would like to protect your MacBook or iMac from comically glassy-eyed, slack-jawed thieves as shown above (or worse... I shudder to think), you can purchase Hidden for $15.

Here's a brief overview of the process:

"When you activate tracking, Hidden will locate your stolen computer anywhere on the planet, collect photos of the thief and screen shots of the computer in use. (We also collect lots of nerdy network information, but we won't bore you with the details!) The Hidden team will also help you work with the police when recovering your stolen computer."

Check out Hidden's plans and pricing.

hell yea they need to make a windows ver for laptops

JUSTICE WILL PREVAIL!!!!
what an amazing app microsoft what have u been doing, this should have been a basic feature on all laptop os. come microsoft pull ur finger out hardly trail balazers r u !! well done hidden

its great until the guy uses your laptop to fap...

Good observation. The guy is Khat addict. Khat = Catha edulis = super addictive #$%@. "The plant material is chewed into a ball, which is kept for a while in the cheek, causing a characteristic
bulge (Nencini et al, 1986)."

I never would have guessed. Interesting.

thanks for the info :D

Interesting
I shutter to think of the other pictures it might have captured during the use of this laptop.

Kudos to you , I could see you with a huge security company in the future , fortune 500, then Forbes ,keep it up !

there is a free open source solution called PREY available for windows, mac and linux..... :D its much much better than hidden'

I imagine that this guy's cheek is swollen because he is addicted to a drug called Qat. Qat contains the alkaloid called cathinone, an amphetamine-like stimulant which is said to cause excitement, loss of appetite, and euphoria. In 1980, the World Health Organization classified Qat as a drug of abuse that can produce mild to moderate psychological dependence (less than tobacco or alcohol).[1] The plant has been targeted by anti-drug organizations like the DEA.[2] It is a controlled or illegal substance in many countries, but is legal for sale and production in many others. Going by the details that this guy is a Cab driver, and obvious use of Qat, I would say this guy is from Saudi Arabia, although Qat is harvested in several other places in Africa and Europe.. But thats just my guess.. *shrug*