Ever think you're spending too much time on your Mac? Ever want to actually see how long you've been on certain apps? Well, that's exactly what Time Sink by Many Tricks tells you.

Let's say John Doe from Texas is bored one day, so when he wakes up, he heads straight to his computer. He plays a few games, reads a few news articles on Safari, and responds to a load of emails in Mail. By the time John is done, it's 3 p.m. Where has all the time gone? Well, since John downloaded Time Sink, he could find this out by just clicking on the application, which informed him that he had spent 3 hours on Safari, 2 hours on Mail, and another 2 hours playing games. Also, he could see a graph of when and how long he was on each program. And he could group certain apps into pools (like work, home and school) so he can get his priorities straight. He can even sneak a peak from the menu bar. Pretty neat!

This can't be possible! Oh yes, it is. Time Sink is a simple app that stays hidden until you actually click on the icon. It's great for those who want to keep track of their time, record computer usage, or just simply have some fun looking at the static graphs. 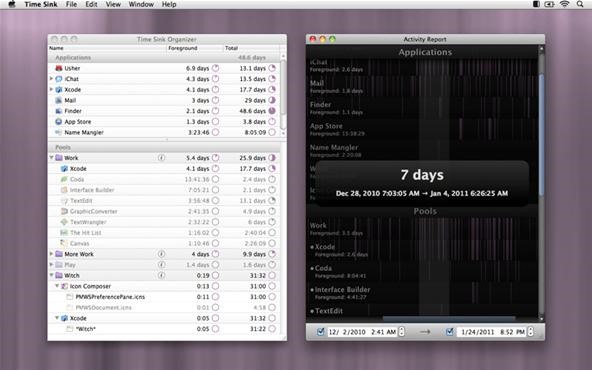 Time Sink costs $4.99 and is available through the Mac App Store or right from Many Tricks. Now you never have to worry where that time went (or is going), and hopefully will help our world's procrastinators stay on task! Check out some screenshots below.